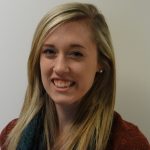 I am running for Student Representative of the Eastern Region in order to build connections and collaboration throughout the region to foster a more engaged community. My experience as Vice-President of the Alpha Delta Lambda chapter at Chatham University has greatly inspired my desire to expand the connections between chapters. As Vice-President, I assisted in organizing the fourth annual Revise the World Carson conference at Chatham University this past fall. Although the conference was a success, greater participation in the Eastern Region could better improve chapter relations resulting in increased support of fellow society members’ events. In addition to the Revise the World conference, I encouraged submissions to the international convention through classroom visits and advertising, as well as implemented member recruitment strategies to grow the Chatham chapter into a more vibrant community.

I believe I have the experience necessary to facilitate community growth on a regional level. Beyond my involvement in the Sigma Tau Delta chapter, I also serve as Executive Vice-President of Chatham Student Government as well as founder and President of Chatham’s Beyond the Page Book Club, a student organization designed to foster community among Humanities majors and book lovers across disciplines. Through these endeavors, I have planned various events such as monthly student organization advocacy forums, two annual Banned Book Week celebrations featuring insightful speakers, volunteering at the Squirrel Hill Carnegie Library’s Read Across America and Halloween celebrations, as well as book drives with Better World Books. It is through the Book Club that Chatham began its relationship with Better World Books, hosting two drives during the 2012-2013 school year that yielded enthusiastic results. After my induction to Sigma Tau Delta last spring, I learned of the honors society’s partnership with the Better World Books organization, and began plans to expand the book drive to encourage maximum participation. As a result, this spring, Chatham will sponsor a drive that includes not just the Book Club and the university’s Sigma Tau Delta chapter, but also the Creative Writing Club, collaborating to further the progress of a mission dear to each literary organization.

After a successful year of chapter leadership, I hope to continue working for this organization that provides such valuable opportunities for students. Be it a trip to Savannah to connect with members from across the country, presenting a critical work in front of peers and professors at a local conference, or donating books to advance literacy and sustainability on a global scale, Sigma Tau Delta is committed to encouraging the absolute best from its members while stressing a collaborative spirit. I hope to continue this mission as a Student Representative for the Eastern region, furthering greater chapter relationships to produce a more synergized region of the society.