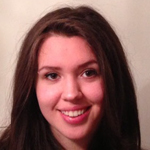 Penguin Group (well I guess now it’s Penguin Random House—not Random Penguin as half the industry had cheekily hoped) is one of the largest publishers in the world. Growing up, before I became attuned to what the insignia on book spines that demarcated publishing houses were, I still knew who Penguin was. That little penguin, which founder Allen Lane called “dignified but flippant,” marks the spines of a good chunk of my personal library today. Five weeks ago, I found myself sitting at my very own desk at the American arm of the publishing giant, assisting the people responsible for publishing the edition of the Adventures of Huckleberry Finn that my professor and Sigma Tau Delta Chapter Sponsor assigned my American Literature class several semesters ago. My nerd brain is constantly screaming at me at top volume, “This is so cool!”

Little more than a month ago I took a one-way flight to New York from my home state of Kentucky, after graduating from the University of Kentucky just a few short weeks before. I had completed a previous internship at the University Press of Kentucky that I loved, and which introduced me to the vocabulary of the publishing world and let me know for certain that publishing is where I want to make my career. Sigma Tau Delta’s generous stipend helped me find a great place to land; thanks to NYU’s summer intern housing I’m lucky enough to be in Manhattan, nestled in between some amazingly delicious food in Chinatown to the east, SoHo’s shopping to the north, and posh TriBeCa to the west. 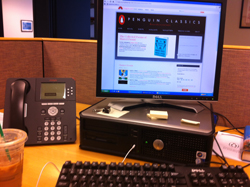 The work I do at my internship is actually split between two departments. Half of my week I spend with the Editorial Department for Penguin Classics, whose black spine editions I spent so much time with during my career as an English major, and the other half I spend with the Penguin Speakers Bureau, who handle author events at conferences and universities for contemporary authors like Katherine Stockett (The Help) and Charlaine Harris (True Blood).  Interning in two different departments is giving me a one of a kind taste for the wide variation a publisher the size of Penguin has to offer as an employer.

Since I only work four days a week (due to a convention in the publishing industry in New York called Summer Fridays that still baffles my mind), I’ve had plenty of time to get out and explore my new city. One of my first Fridays I walked across the Brooklyn Bridge; on another I took a book out to the High Line and kicked back on the reclaimed train track-turned-park high above Chelsea; on a couple more I’ve been able to spend long hours at MoMA and the Met. The Guggenheim is still on my list, but maybe I’ll find my way up there next week.

I’m still getting used to the New York City attitude—seemingly curt, but straight to the point—and the certain kind of tenacity it takes to charge across the street when that cab is barreling up the lane towards you, but I think it’s safe to say that I’ve fallen in love with both the New York publishing industry and New York itself. I couldn’t have asked for a better jumping off point from college than an internship of this caliber. I owe so much to both Sigma Tau Delta and my professors and employers at the University of Kentucky, who have given me the encouragement needed to make the leap all the way from the Bluegrass to the Big Apple.